Diana of the Ephesians

Moulton had at least several reasons for putting forth a message, using Wonder Woman as his vehicle. They include switching and mixing up the male and female roles set forth by God in His word, the King James Bible. He was a feminist who thought that women should rule. He and his wife also shared women. A feminist whoremonger. You would think that is an oxymoron, but it isn't, really.

About male readers, [Moulton] wrote: "Give them an alluring woman stronger than themselves to submit to, and they'll be proud to become her willing slaves!"

The real origin of Wonder Woman, also known as Diana Prince in the comics, goes back thousands of years. The entity or unclean spirit or devil known as "Diana" has a number of different appearances and names. What is common is that Diana is a transgender. He, she, and-or it which is named Diana, is a mix of male and female. I like to say things in a basic way. I like to say things in a way that will force you to take a side.

The character Wonder Woman herself, or itself, comes from the mind of a perverted psychologist who was full of devils. He did his best to pass his madness on to comic book readers all over the world. Wonder Woman, or Diana, is a demigod, or false god, which has been worshiped for centuries, Moulton couldn't help but succeed.

Why is Moulton's character Wonder Woman a success? Partly because Satan has some power to influence us, when we are open to the devil.

Also: Because people are naturally bent toward turning away from the true and living God. Once they do that, they must necessarily turn to false gods... like Wonder Woman.

Satan tries to influence us and entertain us with this stuff. He is very good at it. But the Lord is stronger. The main way to shield against the devil's devices is to stay in the Holy Bible, reading and studying with faith that God is... that He exists... and that He can protect us from deception.

They are not shy about telling you what they are doing. They just know most Christians don’t care. You’ll buy it anyway.

Wonder Woman—it goes without saying. The lady runs around in less than a bikini. There’s nothing good about that. No man or woman could think that’s proper to watch.

But listen to what the mantra, her creed was, so to speak, from the island where she lives. But maybe some of you don’t know who she is.

Wonder Woman’s actually in the Bible. So we’ll turn to the scripture later, and you can see her. She’s in there.

Let all who read these words know: We are a nation of women. Dedicated to our sisters to our gods and to the peace that is humankind’s right.

Granted life by Gaia, the goddesses, and the souls of women past, we have been gifted with the mission to unite the people of our world with love and compassion. 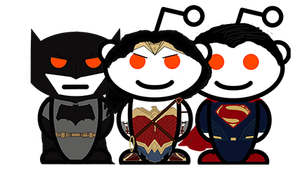 Man has corrupted many of the laws our god set forth. So, in their wisdom, the gods created a race of female warriors, dedicated to idea of uniting all sexes, all races and creeds.

No longer will man rule alone. For now woman stands as an equal to temper his aggression with compassion, lend reason to his rages, and overcome hatred with love.

That’s enough feminism to make you puke, isn’t it? My goodness.

We are Amazons. We have come to save mankind. {laughter} I’m sorry… You can’t make this stuff up. It’s right there.

He struck upon an idea for a new kind of superhero. One who would triumph, not with fists or firepower, but with love.

“Fine,” said Elizabeth [wife and also a psychologist], “but make her a woman.”

By the way, he was a polygamist and a feminist.

Turn to Acts chapter 19 and you can find Wonder Woman.

There’s your Wonder Woman story. That’s her name on her island, the Amazon island.

She is Diana of the Ephesians. She is found in the Bible. She’s that false god.

You see that there’s nothing new under the sun. They’re using that same perversion right here. Here it is, right under your face, and you don’t even notice it.

One of the animated Justice League series featured an episode called "Maid of Honor."

In it, Wonder Woman and a celebrity princess are clearly involved in a lesbian relationship.

As I speak these words, in 2018, the Justice League cartoon writers would not have hesitated to go ahead and put it forth. In the very near future, they'll go even further. And most popular culture consumers are more than okay with it--they love it!

Think I'm reaching? Speculating too much? Not a chance. Listen to what viewers of that cartoon episode thought.

"So close to a Lesbian moment," one person commented, and note that he capitalized "Lesbian." "I was hoping for it, praying for it, but no.﻿" He spelled "praying" with an "e," which was probably an accident, but more accurate.

Another said: "So close to a lesbian kiss!" The people wanted it! Can you see that? They are rooting for what God hates. That's as basic as you can get. Men and women largely want wickedness. They want to watch it.

Here's more: "I wish Princess Audrey and Wonder Woman got together to be honest, like a kiss? anything?﻿"

"That moment at the Eiffel Tower was a perfect time for them to kiss."

"Who was thinking: "Just kiss already!" ?"﻿[Someone answered, "Me!" with enthusiasm. Another answered, "Guilty."]

You and I have got to understand that this was not just some random fun the writers and producers created for entertainment. These creators were, and are, caught up in the spirit of antichrist. That means, they are against things that God says are good and beautiful.

When you enjoy Wonder Woman, you are supporting things that the Lord hates. A perverted and twisted order in the family, and sodomy are just two of those, which Wonder Woman promotes.