Proverbs 12:10: A righteous man regardeth the life of his beast: but the tender mercies of the wicked are cruel. 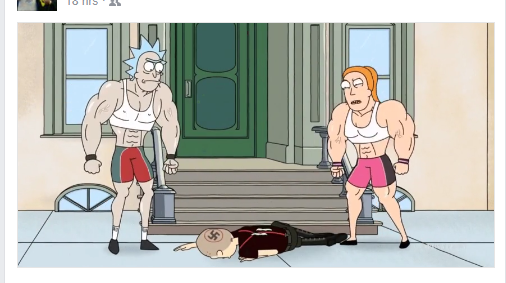 I came across what is called a "GIF" on social media in August of 2017. A GIF is a short film or cartoon, usually lasting three to eight seconds.

A few days before I saw this cartoon, there were Charlottesville, Virginia, protests which ended with an intentional hit-and-run at the hands of a so-called "white nationalist." That phrase is loaded with propaganda and we can deal with that a bit later.

Right now let's look at this GIF image. It portrays an American Nazi-type skinhead young man. This man steps out of his house wearing the swatstika and accompanying paraphernalia, looking like a stereotype and very proud.

From either side of him on the sidewalk, a punk-rock looking man and woman, or maybe they are two men (who knows?), approach him. They are each pumped-up from weightlifting and God knows what else. Both are three times his size and looking fierce. The Nazi type is suddenly fearful. Within a moment, the pair beats him down and each one takes a turn spitting on him.

"So that's the love and tolerance?" was my first thought. "This encourages the exact behavior you claim to condemn."

But don't expect these loving and tolerant ones to see that. They are blinded because of their unbelief in God's wisdom from the Holy Bible. Those who like and share such a cartoon have a general wicked sense of humor. Why? They have rejected the Lord's standard and His definition of love, in favor of the world's twisted version of love. This latter version of love ultimately comes from the devil, who tells us that we need to destroy others for various reasons.

You might say, "The Nazi and those like him deserve such punishment."  I will respond that all three of these cartoon characters are wicked God haters. The woman, if it is a woman, has destroyed her body and femininity. And if it is a man, he is confused. The man, at best, is what the King James Bible calls fierce and incontinent, which basically means out of control. Both of them are out of control emotionally and practically. Just look at their faces. And, of course, the Nazi type hates his fellow man, if only with his words.

People were hurt and killed at those Charlottesville protest rallies. Their families and loved ones are suffering. Some of them want vengeance. Those things are understandable. But we as men and women, as mankind does, take things too far. This cartoon GIF is a literal illustration of it; of emotional pain that leaks over into hateful reaction which is no better than that by which they were hurt.

It is one thing to protect yourself and your loved ones. To want basic respect and humane treatment from other people.

It's another to beat down or kill another person, or laugh about the portrayal of such, because of what he looks like. Isn't that what the "gay bashers" and violent racists do? Isn't that what men who beat up transgender and transvestite types do? Hurt someone who doesn't look the way they think someone should look. But somehow it is funny and celebrated from the other side. 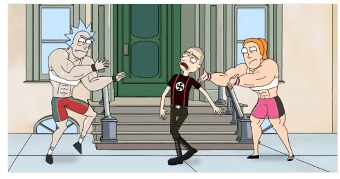 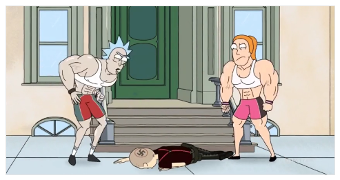 We can safely say that those who think this turnabout is funny and appropriate are the same people who think murdering babies in their mothers' wombs is simply a matter of personal choice. There are surely a few exceptions. But exceptions prove the rule.

The sodomite and sodomite sympathizer believes that killing that child, and beating up a bigot who may have done little but voice his opinion and wear a shirt, is somehow a good thing. They think these things are somehow "merciful." They are saving the unborn from a hard life. They are saving the world from the racists by murdering or shaming. Their tender mercies are simply cruel and they cannot even see it through their tears of laughter and teeth-grinding righteousness.

The word we can use here, is HYPOCRITE.

I am against transgender and all of the LGBTX alphabet madness. But hurting them is wrong. Murdering them is wrong. They, along with their counterpart bigots, need the Lord Jesus and His saving grace, not physical punishment.

This is how you know the falsely so-called "good guys" aren't really good at all. Because they'll cheer a GIF like this, or even a real life approximation of it.