We’re using this series to reveal the differences between the King James Bible and other versions. 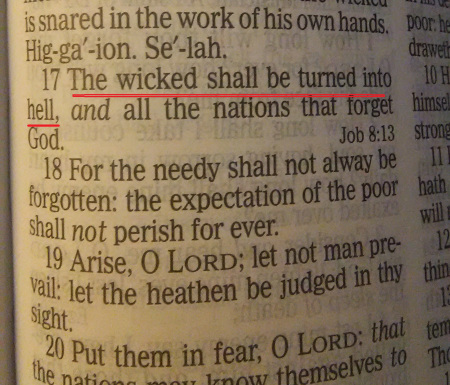 Again: The word “hell” is NOT in the Old Testament of the NIV.

By removing “hell” the NIV perverts Psalm  9:17. Remember that one definition of ‘pervert’, the verb, is ‘to twist.’

In the New Testament the NIV removes “hell” 9 times. Most churches claim to use this version because it is easier to understand with clearer language for the layman.

The truth is that the NIV is less offensive to the sinner, and therefore more profitable for the church that chooses to use it.

Everybody knows what HELL is! Do you know what HADES is? Hades is not always a place of torment or terror. The Assyrian Hades is an abode of blessedness with silver skies called “Happy Fields”. In the satanic New Age Movement, Hades is an intermediate state of purification. Webster’s New Collegiate Dictionary defines HADES: “the underground abode of the dead in Greek MYTHOLOGY”. The NIV perverts your Bible into MYTHOLOGY!

Remember that God promises His words are pure, and perfect… and we are not to add nor take away from them. Brothers and sisters in Christ, do we believe that? or do we believe the world? The NIV is widely accepted, and the Bible tells us that when the world approves of someone or something, it is an abomination.

Psalm 12:6 –“The words of the Lord are pure words: as silver tried in a furnace of earth, purified seven times.” AMEN.