Don't you ever wonder why the world mocks the Holy Bible constantly, yet can't keep talk of God, Jesus, and the Book out of their mouths?

Why do they have to bring Him into it so much? If that Bible is fake and Jesus was just some man, why give Christ so much attention? Why aren't Muhammed, Buddha, and Shiva being joked about 24-7? These are rhetorical questions, because the reason is simple and obvious. Or, it should be: The world hates Christ, because he testifies that its works are evil. 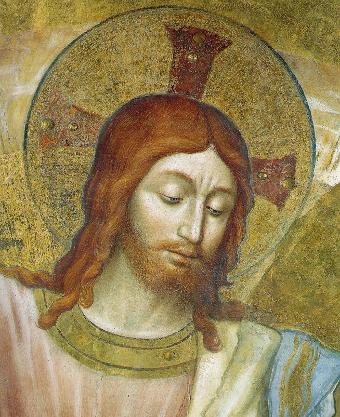 Even 15th century artists weren’t alive when Jesus walked. So why do you think their portrayals of him are accurate?

Look around, and notice, if you haven't already, that popular culture loves to reference the things that born-again Christians hold dear. Even in the blasphemous mocking, they are tacitly admitting the supremacy of Jesus. Why do I say that? Because they cannot stop talking and thinking about him.

The problem is that you think it is just entertainment. But the entertainment is meant to break down your faith in Christ and in the Bible... it is aimed toward making you mock and scorn the truth. And this kind of propaganda works really well. 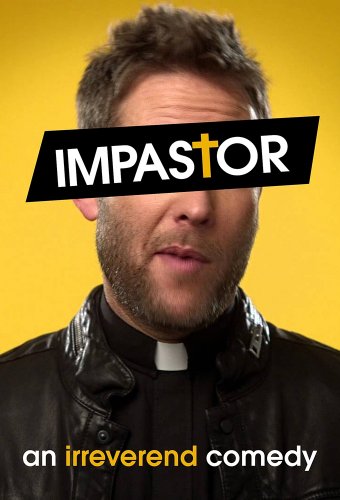 In a promo for the television show "Impastor", the star says, "In the words of Jesus..." and then trails off without finishing the sentence. This is a perfect picture of the world. He cannot speak holy scripture even in a mocking, joking way. Saying things straight from the Bible might convict one of the TV addicts and, you know, influence that addict to turn off the devil's entertainment.

"Impastor" (and other shows that seem to stir in Christianity) are mainly there to laugh at the faith, and mock things that lost people cannot understand. These entertainment vehicles are also there to draw in the gullible Christian. Anything having to do with church, the Bible, and generic mentions of "God" are going to draw the attention of professing believers. Many times, the Christian goes on to justify pretty much anything he's set before his eyes. Because "they mentioned God." This leads to a dulling of his discernment. He'll watch any depravity and, not so much that he thinks there's nothing wrong with what he's seeing, but he makes a compartment for the entertainment and tries to separate it from his works.

God doesn't compartmentalize in that way. He's looking at everything we say and do. God knows that the producers of our entertainment are almost all against Him and His children. The sad part is that His children, the Christians, the saints, the believers, the brothers and the sisters, the brethren, cannot see that they are being taught doctrine by their enemies.

Everyone knows in the seat of their conscience and soul that Jesus Christ is the King of Kings.

There are no atheists. The "atheist" is not saying that he doesn't believe in God, even if he believes that's what it is....

What unbelievers are essentially saying is: I reject the God you are presenting me with, and I have chosen another. 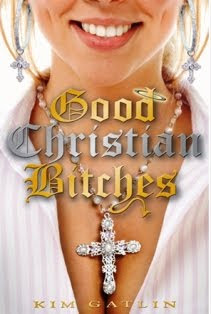 Just imagine if this TV show had been titled "Good Jewish Bitches" or "Good Muslim Bitches." There would be huge boycotts making headlines, or war in the streets!

Who are these other gods? Anything that is not the Lord of the Bible. Anything or anyone except the God of Abraham, Issac and Jacob. Career, money, sex, romantic love, fashion savvy, arts and entertainment, celebrities and other talented individuals, possessions, physical appearance... the list could go on for hours.

And those things are in addition to other religions outside of Christianity, which, if they do not believe in Jesus as Lord and Savior alone, and faith in what He did on the cross alone, are false beliefs.

The Bible plainly tells us that all who deny Jesus is God is a liar and antichrist. There is no wiggle room for others to share His glory. 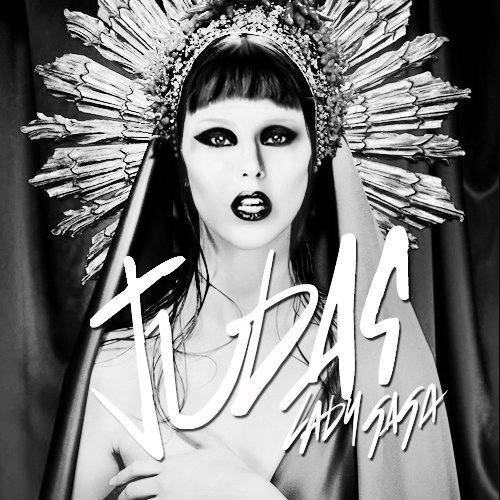 "In the most Biblical sense, I am beyond repentance," Lady Gaga sings in ode to the man of perdition, Judas. Fools sing her lyrics as she worships one of the most wicked men who ever lived.

The world is jealous of Jesus. These people are ruled by the spirit of the devil, enemy of all mankind whether you love Christ or not. Satan is the original competitor, the first "green-eyed monster" of envy. "If I weren't saved, I would be jealous too," said one pastor.

Jesus is perfect, blameless, and has access to all power in existence, holding the universe together. That bothers people who haven't submitted to His authority. Every celebrity in Hollywood, every sports star and politician and power broker and business prodigy rolled into one, cannot equal Christ.

When a normal mortal stands up for Him, and is genuinely, imperfectly living for Him, notice that the unsaved will call that believer "goody two shoes." So multiply that exponentially regarding our Lord. They hate Him. Christians need to understand that and digest: The world hates Christ, because he testifies that its works are evil, and when you walk for Him, they will hate you, too. 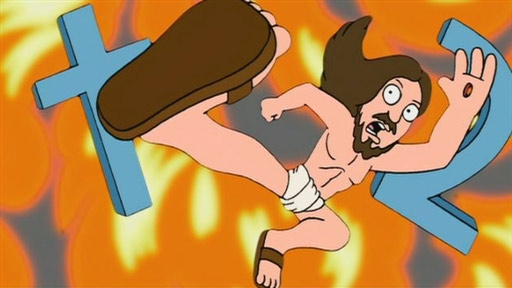 The proud blasphemers who create Family Guy have done many, many Christ-hating bits over the years. Do you profess faith in Christ, yet laugh at this stuff? God sees it all and will not be mocked. (Galatians 6:7)

"99% of the earth's population will ALL be dead 100 years from now," wrote one pastor. "What will anything matter then? What will all of the money, fame, and pleasure in this world matter when we are dead and gone? Are you willing to risk your eternal soul upon the foolish assumption that the Bible is not God's Word?  For eternity's sake, you had better be right. Have you ever studied the Bible? It is frightening. The Bible has never been disproved. Don't you think you should at least do a thorough investigation into the matter? Are you afraid you might find the Truth?

"Where will you be 100 years from now? You can know for certain (1st John 5:13). You need to get saved friend, i.e., you need to be BORN AGAIN by the Incorruptible Word of God.

"This world is temporal, but God offers to us "eternal life" through Christ Jesus. What a Wonderful Savior! " 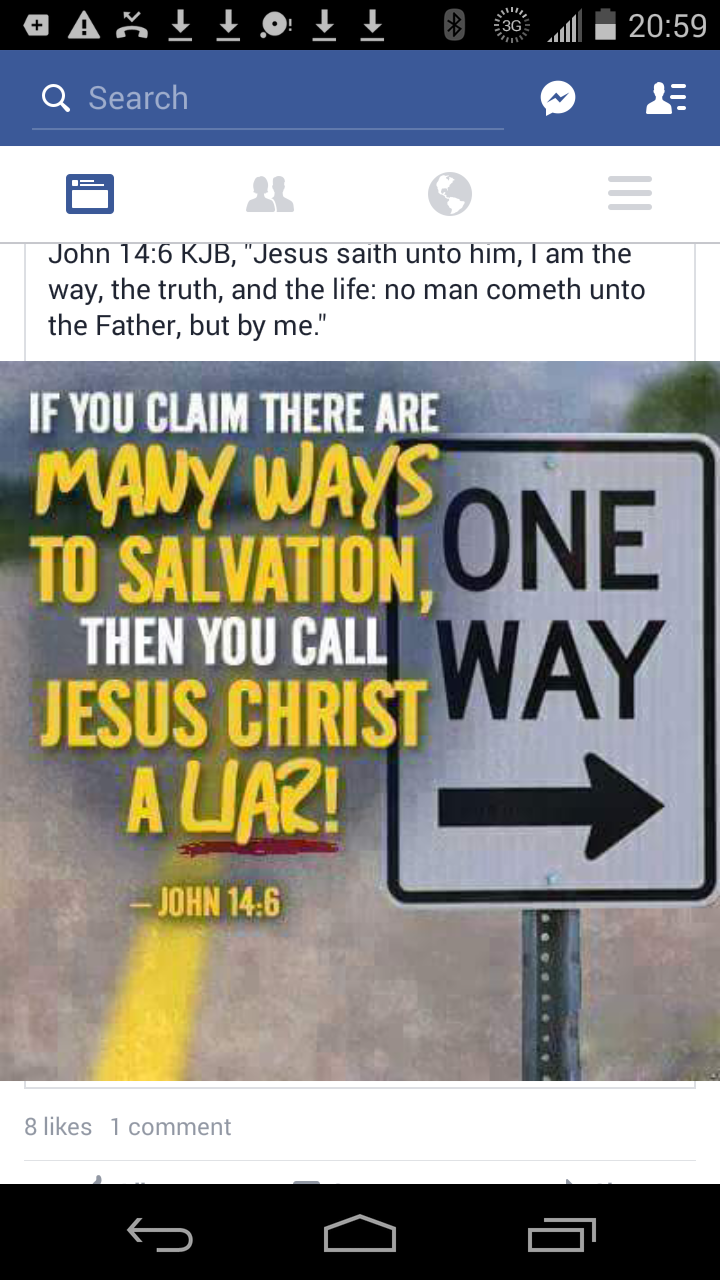