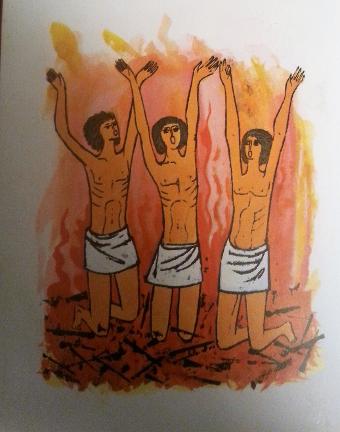 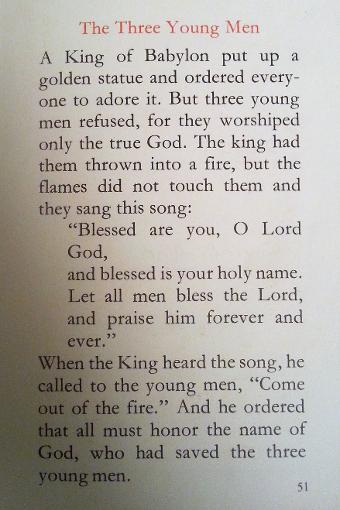 Therefore I make a decree, That every people, nation, and language, which speak any thing amiss against the Shadrach, Meshach, and Abed-nego, shall be cut in pieces, and their houses shall be made a dunghill: because there is no other god that can deliver after this sort.

Lord forgive me for saying these even to teach and make a point. But someone needs to point at this garbage and reprove it.

This is about dumb, I say, foolish, things that we as humans, as men and women, say.

There are a lot of these. You could do a documentary on this stuff. The first one I'm thinking of is used by people so much that I think most of us are numbed to it. This thing of speaking Jesus christ 's name to express anger, disappointment, or whatever in any way but a worshiphful way. That tells a lot.

Why do they need to use the name of Jesus so often? We know why: Because people know who God is. They have just rejected that God.

But since they know the name of Jesus Christ, even in rejection there is a fascination, an attraction. Remember the rock star shaman from Mark chapter 5, who was out in the cemetary, singing and talking to himself and maybe to the dead, wearing no clothes, with many devils inside him. When Jesus stepped off the boat near that devil-possessed man in Mark 5, the man ran to fall at his feet and give at least a form of worship. The King James Bible says, that man who was crying out and cutting himself with stones, that when he saw Jesus afar off, he ran and worshipped him, and cried with a loud voice, and said, What have I to do with thee, Jesus, thou Son of the most high God? I adjure thee by God, that thou torment me not. A devil called Jesus Christ the Son of God. He recognized it. The devil-possessed people walking around influencing you and me recognize Jesus too. THAT'S why they mock Him so much. He's the perfect man. We're supposed to mark the perfect man, and these Christ-rejecters mock the perfect man, which is the Lord Jesus Christ.

I caught myself saying these words and phrases, and that was after I had had my first major fall on my face period in my life. That was after I realized that living for myself had just caused a lot of problems and that I needed to live for Jesus Christ. Not giving over my life in a type of salvation where you have to have good works. I'm talking about believing in faith. I grew up around churches and church folk, knew the basics of being saved, made a profession and was baptized. But it wasn't until I was thirty that I really experienced the God of the Bible. I had been convicted enough to make my eight-year-old profession in the first place. Twenty-two years later, I was like that blind man who Jesus healed. The blind man that saw men as trees walking around. That man had got him a little bit of light. But Jesus healed him a second time and then the man could see clearly. I got a little bit of light at an early age and then saw men as trees walking.

Fast forward to my early thirties, and the conviction and belief in the King James Bible as inspired and preserved by a perfect and holy God had consumed me. So in all kinds of ways, I was casting out all of these old mindsets and ways, in order to walk better with the Lord. If it's real you don't change to appear righteous before men and not even before God. You repent and believe partly because you love God and you know that Jesus said, if you love me, keep my commandments. Jesus gave us ways to be because He loved us first.

All these euphemisms for God, and for Jesus Christ. Like "Gee." Or, since we don't say that a lot in the 21st century:

"Jeez." You want to curse in Christ's name without really saying His name. Kind of like saying X-Mas.

Daniel, chapter 3. The three Hebrew men were bound to worship the name of the true and living God. Seems that you could go a lot of different ways there. But one way is that these young men disagreed with the worldly powers and what was to them "popular culture" about who God is.

In a child's book account of Daniel 3, Shadrach, Meshach, and Abed-nego, the book creators present the men as singing in the fire's midst, and with a pre-incarnate Jesus Christ walking in the furnace with them.

Blessed are you, O Lord God,

and blessed is your holy name.

Let all men bless the Lord,

and praise him forever and ever.

"Gadzooks", was a kind of shorthand blasphemy for "God's hooks" or the nails in the palms and feet of Christ. See, there's all these kinds of blasphemy of the true God, especially when God is in the person of Jesus Christ.

We're so desensitized by all these images and technologies and distractions and all these people who we hold up as idols.

The king named Nebuchenezzar who originally ordered the men into the fire saw that they survived and had a moment when he saw Jesus, figuratively and literally. "Lo, I see four men loose, walking in the midst of the fire, and they have no hurt; and the form of the fourth is like the Son of God", capital S and capital G. We're talking about Jesus Christ, who was with God and who was God, walking and maybe singing with those men in a furnace so hot that the men who threw the three men in were fried.