Anyone who drives has seen the bumper sticker: THE MORE PEOPLE I MEET, THE MORE I LIKE MY DOG. That sentiment turns into frothing rage when it concerns Mike Vick.

We're a few years removed from his prison release, and his dogfighting past has resurfaced. Why? Because Vick put a photo on the social media platform Twitter, that revealed a box of dog biscuits. "He has a dog! MICHAEL VICK OWNS A DOG!?" 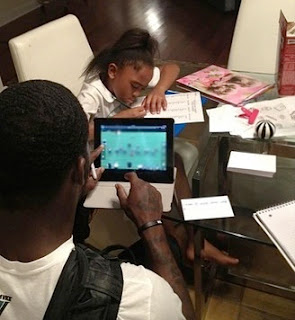 People for the Ethical Treatment of Animals has been worried about this for a few years.

All dogs don't go to heaven.

Some people seem to care more about animals than other humans. Some people come right out and admit it. The abortions and Darfurs and child abuse victims of the world don't move the emo-needle ... at least not as much as images of cows being shuffleboarded around by forklifts. Or the mental image of Vick and his friends laughing as they torture and slaughter dogs.

Michael Vick, the pro-football player who recently pleaded guilty to dog-fighting and animal cruelty, is a sorry excuse for a human being.  He should go to prison.  Yet, we're just talking about animals here.  What about the 48,000,000 human beings, little babies, who have been ruthlessly cut into pieces, dissolved into acids, or had their skulls cracked open and brains sucked out while ALIVE in abortion clinics all across America?  If Michael Vick is a monster, and he certainly is, then so are all the abortionists in the United States who deliberately torture little babies to death!!!  Yet, in our sick, morally twisted, and utterly confused American society today, the average person doesn't see any evil in murdering children.  Millions of Americans are outraged at Michael Vick and want him severely punished, for torturing and killing dogs; while mothers who do the same thing to their babies are encouraged, comforted, and protected by law.  Hypocrites!  Are dogs more precious than human babies?  We are living in a freak society today.

ESPN published Nils Lofgren's rant in 2010, when the musician argued for banning Vick from pro football. "Hurt and demoralized" was part of Lofgren's puzzling sign-off. Does every injustice, every instance of violence and cruelty, affect Lofgren this way? If so, he must be exhausted by bedtime. Back then, he wrote:

"The cynic in me thinks maybe if Vick were a third-string lineman, the NFL would have set an example and banned him for life."

Lofgren might be correct. But... Vick was not a lineman. He was a starting quarterback in the NFL. A handful of men on the planet can do what he did, and that made him (or his body, his talent, whatever) a valuable commodity. Anyone who's capable of absorbing this very sentence knows: where ever you go, the rules are different depending on who you are and what you can do. Swing away at that fact all day and it won't change.

This Lofgren letter to the sports community took on new meaning in the wake of the dog treat photo, almost two years later. Lofgren tried to shame the sports media and fans who either welcomed or shrugged at Vick's return to the league. But the cynicism and bottom-line mindset in sports is just representative of every other aspect of our world.

It is laughable that a career rock musician isn't familiar with the theme of rich, privileged entertainers getting away with things. You can be assured that some of Lofgren's contemporaries and friends have done the most reprehensible things we've never heard of. That is not idle speculation. I've read some of their books. We have all heard of or seen those "behind the music" specials.

Nils Lofgren isn't upset about families ruined because of rock musicians' addiction to heroin, alcohol, cocaine, and other substances. He isn't outraged about his guitar heroes and idols (Jimi Hendrix, Arthur Lee, and so on) infecting America and the world with satanic lyrics and music. He is angry about dogs. The word for that is hypocrisy.

Lofgren: "Maybe many of the other significant charges Vick was facing wouldn't have gone away if he didn't have the prestige of being an NFL quarterback who can afford high-priced lawyers to wrangle pleas and deals."

Again--I'm sure if we replace "Vick" and "NFL quarterback" with many of Lofgren's peers over the years, the above quote would still stand.

At least he wasn't as silly as the media personality Tucker Carlson, who actually called for Vick's execution. Clearly Carlson was crying for attention. But if Vick deserved to die for what he did, what have the architects of America's wars earned? What have the baby-killing abortionists earned?