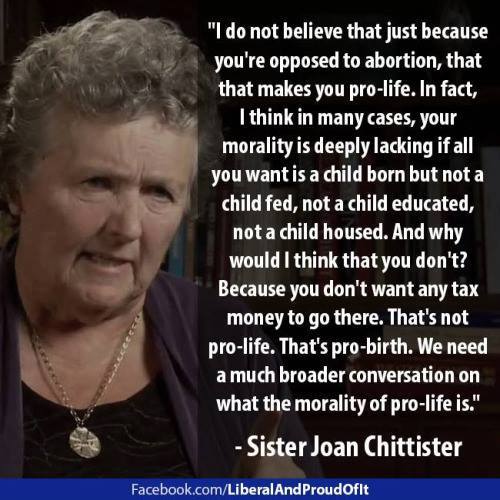 Who exactly is this nun talking to, and about?

The fact that Joan Chittister is a nun, a representative of the Roman Catholic church, is important to note right off the top. A lot of professing Christians who do not attend Catholic churches, and who approve of women murdering their own babies while the children are still in the womb, applaud quotes like Chittster's.

You may have heard people say things like, "In my family we can criticize and even insult each other. But, if you insult my family, you're in trouble with me. We will then all turn on you, the outsider."

I have a similar outlook about the true children of God. When unbelievers mock and scorn, their lies need to be rebuked. We should show discernment as to where and when this pushback comes from us, as believers. But we are supposed to contend for the faith... However, within the faith, we're supposed to sharpen each other. This should be a family that loves enough to correct sin--again, within reason and without a hypocritical spirit. This is usually where the "judge not, don't ever critique or correct me" types of people make an error. We ARE supposed to judge righteously, not out of our own traditions and standards but using the Lord Jesus Christ and the King James Bible as the mark.

This nun's rationalization for abortion is absurd. All of you who agree with her justification for killing little people who cannot defend themselves, are absurd.

Think about it: You're defending baby murder by saying, "Well, if you don't care about them after they're born, you're morally wrong." Basically, your logic says: Kill the baby so that they never have to suffer. That is what you're saying. It is insanity. The Bible says that in the end times, the nations will be mad. That doesn't mean people are going to be angrier, although that is part of it... it means people are insane. We're here, folks.

I want to know, where are all of these "pro-choice", or "anti-baby-murder", people are who turn their backs on children after they're born? I have always heard pro-baby-murder types talk about these so-called conservative politicians who fight for the baby's right to escape the womb, and who then do everything in their power to hinder that child's growth and health and general well-being... who are you talking about, abortion fans? Point them out to me.

One social media commenter, agreeing with the nun's quote, wrote: "Pro life means more than the time at which a baby is born. It means ensuring for 18 years the child has basic necessities."

Okay. Let's look at this.